Inglis Digital celebrates the New Year with $2.4 million in turnover 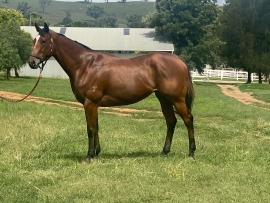 The first Inglis Digital Online Auction of 2021 has become the third consecutive sale to gross more than $2.3 million and posted another excellent clearance rate of 84%.

3YO Not a Single Doubt filly Cave Hill, a sister to Stakes-placed Maqsad, topped the sale at $105,000, bought by Queensland-based Number 1 Quality Bloodstock.

Cave Hill was offered by Aquis Farm, whose Inglis Digital graduates include Ruddock, Defence Attorney, Igniting, Dubai Tycoon, Gamboa and many others.

As a half sister to Magic Millions 2YO Classic contender Swift Witness, Ciaron Maher Racing consigned 3YO filly Taylor’s Dream caught the attention of several parties, with Bell View Park Stud the successful bidder at $85,000.

“The fact her half sister is the current favourite for the Magic Millions on Saturday is exciting but whether the result goes that way this weekend or down the track, it’s a pedigree with plenty of upside.

“We haven’t decided yet what we’ll do with Taylor’s Command, it’d be nice to win a race with her but either way the intention is to send her to the breeding barn this Spring.

“We’ve bought off Inglis Digital several times, one is Liveinthefastlane ($90,000) who has been going really well, she won recently and we’re hoping to get a Metropolitan win with her this prep."

Extreme Choice colt Mohawk was snapped up by the highly successful Fortuna outfit for $65,000, becoming the 109th purchase for the syndicate since its 2007 launch.

“We’ve been syndicating since 2007 and have always bought yearlings but about two to three years ago, Mark Walker and I identified this opportunity to source well-bred horses that had been bought by high profile ownership groups as stallion prospects, but they’d had a few trials or races and either not up to city grade or needed gelding and would therefore be offered on Inglis Digital,” Galvin said.

“We decided to target some of those tried horses for our large client base in Singapore and New Zealand, who just want to race and enjoy a winner, even if it’s a maiden like Entertainer on the weekend in Singapore or Navalaha ($27,500) who won on debut for our NZ-trainer Jamie Richards in December.

“We’ve got a couple of spies on the ground in NSW and VIC, who give us feedback about the horses we are looking at online but we always vet them.

“We had Mohawk vetted a couple of days ago and he was clean so we just set a budget – I went over a wee bit but as he’s a 2YO he has more scope.

“Fortuna syndication has a lot of clients in NZ, Singapore and Hong Kong but we’re very keen to grow in the Australian market,” Galvin said.

The January (Early) Online Auction concluded with a gross of $2.4 million, setting the tone for another successful year, following a record turnover of $53 million in 2020.

It’s also the beginning of a busy month for the Inglis Digital platform, with a 49% share in last start Stakes winner Never Again (High Chaparral) to be offered in a special Inglis Digital sale held between January 18-20.

His next assignment is the $140,000 Listed John Dillon Stakes at Caulfield on Australia Day, followed by the $160,000 G3 Shaftesbury Avenue Handicap at Flemington.

The January (Late) Online Auction, which opens for bidding on January 22, will feature an unreserved dispersal from Rangal Park in Victoria.

The draft will comprise of 32 broodmares and three weanlings, with every mare offered with a free nomination to Cliff’s Edge for the 2021 season, which is fully transferable to another mare.

The Melbourne-based Inglis Bloodstock team will be inspecting the draft ahead of the January (Late) Sale and can be contacted by interested parties.

Parade videos and photos will be available online when the January (Late) Sale catalogue goes live on Friday, January 22.

To enter a horse in the next Inglis Digital Online Auction, CLICK HERE.