Inglis Digital May Sale topped by mare in foal to Kingman 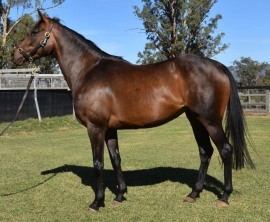 Out of a half sister to Goldikova, Djiva was purchased on behalf of HH Sheikh Mohammed bin Khalifa Al Maktoum by his Racing Manger Tim Stakemire for $200,000.

She was offered by Chatsworth Park as agent and is carrying one of only 13 Southern Hemisphere pregnancies to Kingman.

The May Online Sale concluded Thursday evening with a second consecutive record gross of $4.75 million from 443 sold (75%).

“We are very pleased to have secured Djiva, considering she is well related and is carrying a particularly valuable pregnancy,” Stakemire said.

“She will likely visit Pride Of Dubai this spring – we are very excited about him given the positive impression made by his first runners this season – and the trainers seem to think that they will improve further with time and racing.

“It’s obviously early days in his stud career, but he could be the real deal.’’

Stakemire praised the Inglis Digital platform, noting the quality of stock on offer has improved progressively over the past 12 months in particular.

“It is a platform that we are very familiar with the effectiveness of, in terms of both buying and selling,’’ he said.

“Like many things in life, as a patron, you want to get good service and in that regard Inglis Digital is outstanding.

“Dealing with helpful, obliging people makes the experience a very pleasant one and we’ll continue to identify suitable opportunities to use the platform as both buyer and vendor.”

The 3YO filly Earth Song sold for $175,000 to MC Melbourne Racing, with the intention being that she will join the soon to be re-established David Hayes stable in Hong Kong.

A graduate of the Inglis Scone Yearling Sale, Earth Song was coming off a last start win at Randwick on May 20 and was offered for sale by Kevin and Vikki Payne of Darranda Pty Ltd.

“We’re very happy with the outcome, I thought it was a fair price for a good, young filly that has a lot of racing in front of her and a solid pedigree too,” Kevin Payne said.

“We had several phone calls from interested parties and the eventual buyer had her vet checked for Hong Kong late in the proceedings.

“She’s won three races for us with Chris Waller who has done a wonderful job with her, but we race a lot of horses and felt now was a good time to move her on.

“We’ve used Inglis Digital on a number of occasions, mostly to buy, and it’s very easy to use, as well as being an essential platform for the industry.’’

The G2-winning mare Mamzelle Tess, offered by Malua Racing (as agent), sold to Holloway Equine for $110,000 while G1-placed gelding Sikandarabad was bought by Sam Kavanagh for $100,000.

The Inglis Digital sale schedule will revert to its usual twice-monthly format in June, with entries for the June (Early) Online Sale set to close at midnight on Wednesday June 3.