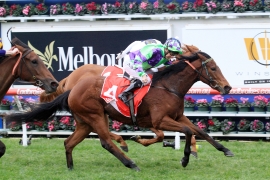 Yarraman Park's star sire I Am Invincible kick started the new season with a stakes double at Caulfield as I Am a Star returned from a break to take the Group III MRC Quezette Stakes and Voodoo Lad scored a career best win in the Listed MRC Regal Roller Stakes.

Having her first run since winning the Group III SAJC National Stakes in May, the Shane Nichols trained filly flew home from back in the field with a late rush to snatch a half head win in the 1100 meter dash.

Nichols said he was not confident of victory for I Am A Star until the closing stages.

"She's a winner. Halfway down the straight I thought to myself she's going to run a nice fourth or fifth but gee, didn't she find the line," Nichols said.

"I will say she did give me a bit of a heart flutter late.

"I said to Steve that if he could balance up and find the line he might find some of these a bit soft."

Nichols said he was confident I Am A Star would run well but was unsure if she could win.

"When she drew wide it took the pressure off as it meant we could ride her cold," Nichols said.

"To be honest, I didn't think we'd win until 20 (metres) to go but she's had a faultless preparation and she's won.

"We can go three weeks now into the Atlantic Jewel and then see if we get to the Thousand Guineas."

I Am a Star was a $40,000 Inglis Classic purchase for James Harron Bloodstock from the Broadwater Farm Thoroughbreds draft and has already won three of four starts and over $213,000 in prizemoney for owner Matthew Sandblom of Kingstar Farm and Newgate Farm.

I Am a Star was bred by Eales Racing and is the third winner for Star Band (USA), a half-sister by Dixieland Band to Group III winner Common World from the family of Australian Group I winner Pear Tart.

I Am Invincible made it a stakes double when speedy five year-old Voodoo Lad dashed away to win the Listed MRC Regal Roller Stakes as he pleased.

The Darren Weir trained gelding was strong to the line winning the 1200 metre sprint by two and a quarter lengths.

His own worst enemy at times, Voodoo Lad produced his best to win his first stakes race.

The five-year-old has a habit of over-racing so Weir sent Voodoo Lad to a barrier trial on Monday.

"We dropped him out the back and just let him rip the last 300," Weir said.

"Chris (Parnham) did a real good job getting him to settle. I was a little bit concerned when I saw him start to over-race at the 400 (metres).

"But he tucked his head in and then got into a beautiful rhythm and was really strong through the line.

"He's a lovely horse to train down the beach, we don't gallop him much and he races best fresh - being able to get the trial into him on Monday made all the difference."

Purchased for just $36,000 by Segenhoe Thoroughbreds from the Yarraman Park draft at the Inglis Scone Yearling Sale, Voodoo Lad has the overall record of seven wins from 14 starts with prizemoney topping $417,000.

He is the last foal and third winner for placed Gilded Time (USA) mare O'Fortuna, who died in 2012 and whose dam is a sister to champion sprinter Schillaci.

Voodoo Lad is the 14th stakes-winner for I Am Invincible, who is booked out this spring at a fee of $55,000.