It's Me remains unbeaten to win $1.3m The Kosciuszko 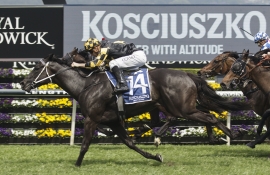 “Last year we won The Everest, this year we win The Kosciuszko. Throw a Melbourne Cup in between and it’s been a pretty handy 12 months for the Kitchwin Hills team.’’

It’s hard to argue with Kitchwin boss Mick Malone, who with his team was tonight celebrating the stunning win of It’s Me (Shamus Award) in the $1.3m The Kosciuszko at Randwick.

The win by the unbeaten and untapped It’s Me capped off a spectacular day for Inglis graduates, who also won The Everest (Classique Legend), the G3 Sydney Stakes (Trumbull), G3 Moonga Stakes (Wild Planet) and Listed Alinghi Stakes (California Zimbol).

For Malone, the victory of It’s Me – her fourth from as many starts – was as spectacular as it was satisfying.

“She was always a lovely filly, born and raised at Kitchwin and when we got to the Classic Sale, Shamus Award wasn’t exactly the talk of town but we always had faith and I always liked this filly,’’ Malone said.

“She’s a proper racehorse too. That finishing sprint on her, wow. I think everyone thought she was beaten today but when Jason [Collett] finally saw daylight, she flew home over the top of them.’’

Trained by Brett Cavanough, It’s Me (pictured) is a $65,000 Classic Yearling Sale buy for Sam Lyons of Grand Syndicates, from the Kitchwin draft.

Lyons was trackside at Randwick today, extremely proud of his mare’s winning performance.

“It’s just vindication. We really wanted her to do that because we were so scared that things would go wrong, like they did today really, but it probably puts a few people who had question marks over her accept that she’s pretty good,’’ Lyons said.

“That’s the exclamation mark on her now.

“I remember her at the Inglis Classic Sale, she was just a great type, she was cheap but I liked her presence and her walk and well here we are two years later winning a $1m race.’’

It was a dominant performance by the 5YO, a $125,000 purchase for trainer Kim Waugh from the Mel O’Gorman Racing draft.

Trumbull’s win was one of many significant results today for the Ready2Race Sale, with Tuesday’s edition receiving multiple pedigree updates.

And lot 139 (Dundeel x Tang) is a brother to Hit The Shot, which finished 3rd in today’s G3 Norman Robinson Stakes at Caulfield.

The colt is being offered by Baystone Farm.

Inspections for the sale continue tomorrow and Monday at Riverside before the auction begins at 10am Tuesday.

Tomorrow morning will see the annual Veuve Clicquot Ready2Race Parade at Riverside from 11am, where a lot from every draft will be featured for buyers while they enjoy a complimentary brunch on behalf of Inglis.

The parade will be live streamed onto the Inglis website for those unable to attend.

At Caulfield, Wild Planet (Animal Kingdom) won his second Stakes race of the preparation with victory in the G3 Moonga Stakes.

The win continued a stellar preparation for the 5YO, who also won the G2 Theo Marks Stakes and was unlucky in his other two runs.

Wild Planet is a $280,000 Easter Yearling Sale purchase for his trainers Hawkes Racing and Andrew Williams Bloodstock, from the Arrowfield stud draft.

“He was a very, very good individual at Easter and the mare (Salutations) was a very good mare,’’ Williams said.

“He was a Hawkes short-list and I loved him too so it’s great to see him furnishing now into a quality racehorse.’’

And California Zimbol (I Am Invincible) proved too strong in the Listed Alinghi Stakes, also at Caulfield.

The 4YO mare is a $450,000 Easter buy for Marie Yoshida’s Asian Bloodstock Services.

She was offered by Yarraman Park Stud.