Ken she do it? Yes Kenedna can! 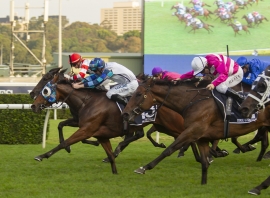 Kenenda capped off a big week for her sire Not A Single Doubt and became the 11th individual Inglis graduate to win a G1 this year when successful in today’s Coolmore Legacy Stakes at Randwick.

Bred by Arrowfield Pastoral, Kenedna was having her 16th consecutive start at Stakes level – which had netted nine minor placings - and thoroughly deserved her G1 breakthrough.

The win came as no surprise to co-trainer Ciaron Maher.

“She was the fresh horse on the scene, she’s a really consistent mare and I’m so glad for her owners that she got this win today,’’ Maher said.

“She came to us in great order, it’s been a great job from my team to keep her going and get her winning a Group 1 race. This is what it’s all about.’’

Kenedna became the 10th individual G1 winner for Not A Single Doubt, who finished fourth on the leading sires list at this week’s Australian Easter Yearling Sale, averaging $528,333 from 15 progeny sold.

Meanwhile Classique Legend (Not A Single Doubt) asserted himself a star of the future with a comfortable win in the $1m G2 Arrowfield 3YO Sprint at Randwick.

Bred by Wallings Bloodstock, Classique Legend made it three wins from four starts with his first Stakes victory.

He was the sale-topper at the 2017 Classic Yearling Sale, when Carmel Size paid $400,000 for him out of the Gold Riband Session, where he was offered by Tyreel Stud.

After today’s win, Size said: “I really need to thank Mr Ho for letting me buy these beautiful horses like Classique Legend. It’s a privilege, it’s living the dream.’’

And Fasika (So You Think) kept her unbeaten record in tact with a tough victory in the Listed South Pacific Classic at Randwick.

Stepping up to Stakes level for the first time, the Joe Pride-trained 3YO defied a series of late challenges to make it three wins from as many starts.

In Melbourne, Secret Blaze gave his sire Sizzling his first Stakes winner when victorious in the Listed Galilee Series Final at Caulfield.

It was a second consecutive victory and third overall for the 3YO, who was a $90,000 buy for his trainer Tony McEvoy at the Melbourne Premier Yearling Sale, where he was offered by Millford Thoroughbreds.

And in Adelaide the 3YO filly Humma Humma (Denman) scored a deserving first Stakes victory in the Listed Redelva Stakes at Morphettville.

Redgum Racing purchased the Bridsan Bloodstock-bred youngster for $80,000 at the Melbourne Premier Yearling Sale, where she was offered by Flinders Park Stud.

Buyers’ attention has turned to Oaklands for the Melbourne Gold Yearling Sale, which will take place on Sunday April 28.

It is followed by a big few days of action at Riverside for the Chairman’s Sale (Friday evening, May 3) and the Australian Broodmare and Weanling Sale (May 2,5,6).