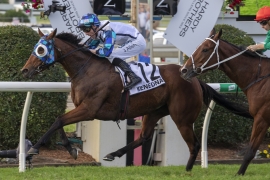 Gutsy mare Kenedna secured a second G1 win in the space of five weeks with a dominant performance in today’s Doomben Cup.

The 5YO has proven herself a mare of the highest order, with today’s race her 18th consecutive start at Stakes level.

In that period she has now won twice at G1 level and finished in the placings a further nine times.

Kenedna’s Doomben Cup victory was the 25th G1 win by an Inglis graduate this season, and 16th this year alone.

Co-trainer Maher revealed post-race the ownership group had considered retiring Kenedna early to become a broodmare but was grateful they chose a different path with her.

“This is a great group of owners, they’ve been supporters of mine for a long time now,’’ Maher said.

“The horse came to me in great order from Darren Weir and a lot of his team have had a lot to do with her, who now work for my team.

“Darren encouraged the owners early on to race on, he thought the horse would continue to develop so to keep her in training and not send her to the breeding barn.’’

It’s proven a monumental decision, with today’s success coming after Kenedna scored her first G1 in the Coolmore Legacy at Randwick during The Championships on April 13.

“This was always her target race today,’’ Maher said.

“When she got the Coolmore Legacy it was a bit of a bonus.

The owners have got a multiple Group 1-winning mare now and she’s very valuable.’’

John Messara of Arrowfield Stud – which bred Kenedna and offered her for sale in Melbourne – said:

“Kenedna epitomises what we always aim to breed and sell, a high-class, thoroughly genuine mare who thrives on every challenge she meets. And her dam Miss Dodwell is a real treasure – she’s had five winners from five to race, including Kenedna and multiple Group winner [and fellow Inglis graduate] Spill The Beans.

“Not A Single Doubt is having a tremendous year, he leaves class in every category, has just gone through $10 million prizemoney in Australia for the fourth consecutive season and Kenedna is his third dual Group 1 winner after Miracles of Life and Extreme Choice.

“We’re immensely proud of him as a homebred son of Redoute’s Choice and delighted for Kenedna’s owners, and trainers Ciaron Maher and David Eustace.’’