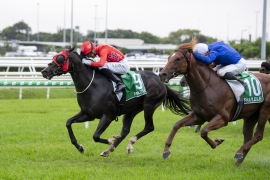 Rising star Mazu (Maurice) announced himself the new star of the Australian sprinting ranks with a fighting victory in today’s G1 Doomben 10,000.

Mazu had won his five previous races ahead of today’s assignment but had never been tested at G1 level.

But the doubters needn’t have worried, with the 3YO proving his future belongs at the top level, defeating some of the best sprinters in the land in winning today’s G1.

It capped off a big week for Mazu’s primary owners Triple Crown Syndications, who secured an Everest slot through The Star and Arrowfield for the next two years in the days leading into today’s race.

Triple Crown’s Michael and Chris Ward paid $180,000 for Mazu at the Classic Yearling Sale, where he was offered by his breeder Parsons Creek.

“As soon as we sold him I felt a bit torn so I rushed up to the Wards and asked if I could buy into him and they let me in so I’m delighted on so many fronts,’’ Parsons Creek’s Marc De Stoop, who watched today’s race with his wife Lindy in Minnesota, USA, in the middle of the night, said.

“He was always something special in the paddock, we knew he was going to be something good, we put him through Inglis and the ride since then has been amazing.

“He’s our first G1 winner off the farm, actually he’s only the third horse we’d bred on the farm at the time since we took it over in 2015.

“We’re into quality, not quantity, and this is just such an amazing result for Parsons Creek. Inglis has been very good to us since we took over the farm and to have that first G1 winner as an Inglis graduate is fabulous too.’’

Winning co-trainer Paul Snowden added: “I was watching him in the run and we used him up to get to a spot and they didn’t back off and so he didn’t get a chance to travel as he does in his races.

“He does hit that flat spot but that ability to absorb the pressure and still be strong at the end, well that is why we have got a slot in the Everest and that is why we are going to be there.’’

Meanwhile at today’s stand-alone meeting at Scone, up-and-coming 3YO Flying Crazy (Flying Artie) made it back-to-back Stakes wins – and three from his past four starts – with victory in the Listed Luskin Star Stakes.

Trained by Gerald Ryan and Sterling Alexiou, Flying Crazy has now won five of his 11 starts and takes his career earnings to $310,000.

It’s already a fabulous return on investment for the SF Bloodstock and Blake Sandblom-bred Flying Crazy, who was sold to Will Forrester’s WBF Thoroughbreds and Equi-Com Syndications for just $40,000 at the Classic Yearling Sale out of the Newgate Farm draft.

And at Morphettville, rising star Illation (So You Think) kept his unbeaten record intact with another dominant performance to win the Listed Adelaide Guineas.

Illation has been to the races three times and has been explosive in each of his three victories, with co-trainer Mick Price saying prior to today’s win that he was eyeing off the Cox Plate later this year with the 3YO.

Bred by a syndicate that includes Lindsay Maxsted, Peter Allen, Greg Hayes, Simon Tuxen and Greg Ingham - in whose colours he races - Illation is a graduate of the 2020 Easter Yearling Sale, where he was offered by Coolmore.