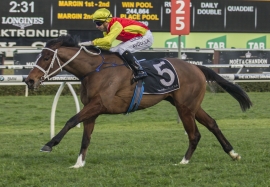 OMEI Sword stormed into Golden Rose contention with an arrogant win at Royal Randwick on Saturday but whether she lines up in the Group 1 feature remains to be seen.

Trainer Chris Waller admits the timing and distance of next month’s $1 million Golden Rose (1400m) is ideal but his preference is to keep Omei Sword to three-year-old fillies’ races at this stage.

“I don’t think we will be arrogant enough to suggest the Golden Rose would be one of (her targets) but we won’t completely discount it and the distance and timing of the race would suit,” he said.

“It’s not my preference to be running a filly in that race but I have to answer ‘will she still be sharp over 1200m (for the Furious Stakes) in two weeks on the way to the Tea Rose which is in four weeks’.”

Omei Sword firmed to $8 second favourite for the Golden Rose behind Up And Coming Stakes winner Divine Prophet ($6) after unleashing a devastating finish to score by 3 ¼ lengths from Bacarella.

Omei Sword, whose mother Irish Lights won the Thousand Guineas in 2009, showed ability as a two-year-old but is only just starting to come into her own.

“She is all class,” Waller said. “She is a well-bred filly that we have given a bit of time yet she still raced as a two-year-old. That grounding has been very valuable and she is racing tractably now and she knows what it’s all about.

“She only just touched the bridle throughout the run and she was just out of her comfort zone I thought, but to see her travel up the rise and then let down like she did is a sign of a pretty handy filly.”

The main aim for Omei Sword is the Group 1 Flight Stakes (1600m) at Royal Randwick on October 1. “The Flight Stakes looks the obvious race from her breeding and being up and ready to go now is a bonus,” Waller said.

The natural lightweight only secured the ride on Omei Sword because Hugh Bowman couldn’t make the weight (55kg) and he is making the most of his opportunities with the big stables.

“I’m just letting things happen and backing my horses’ abilities and if I put them in the right spot they will get the job done and that’s the main thing,” he said. “I was just trying to keep her out of trouble for most of the race and I was confident if I did that she would win.

“She has a very promising future.”

The start of the Silver Shadow Stakes was delayed by 10 minutes after late scratching Calliope became cast in the stalls for several minutes.