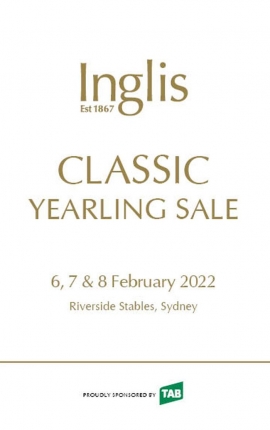 The catalogue for the 2022 Inglis Classic Yearling Sale – the auction that has produced the winners of the Melbourne Cup, Golden Slipper, The Everest, Blue Diamond and Inglis Millennium among many other features in recent seasons – is now available online.

The sale will see the progeny of 107 different stallions, including a broad range of Australasia’s best sires and sire prospects, showcased by 75 individual vendors.

Of the catalogued lots, 700 (86%) are BOBS Eligible while there are also VOBIS, Westspeed and QTIS-entered yearlings.

In the past five years alone the Classic Sale has produced the winners of the aforementioned big races as well as other G1s such as the Sires’ Produce Stakes, Champagne Stakes, Lightning Stakes, Randwick Guineas, Victoria Derby, Empire Rose, The Galaxy, William Reid Stakes, Moir Stakes, HKJC Centenary Sprint Cup etc and big prizemoney events such as the $2m The Invitation and $1m Golden Gift by gallopers including Classique Legend, Vow And Declare, Castelvecchio, In Her Time, Extra Brut, Icebath, Sejardan, Pippie, Hot King Prawn etc.

There have been 10 individual G1-winning graduates since 2018 out of the Classic Sale – eight of which could have been purchased for $100,000 or less – and 14 graduates to win $1m or more in prizemoney in Australia in the same period.

The $2m Inglis Millennium, the race surpassed only by the G1 Golden Slipper in terms of prizemoney for an Australian 2YO race, has been won by Classic graduates in each of its first three renewals thanks to Castelvecchio, Prime Star and Profiteer.

It is a sale that has also become a significant source of future stallions with the likes of top-class sires I Am Invincible, Extreme Choice, Brazen Beau and Choisir graduating from the sale, as well as high-class sire prospects like Hellbent, Castelvecchio, Cosmic Force and Santos amongst others.

Inglis’ NSW Bloodstock Manager Chris Russell was proud of the quality and diversity the 2022 Classic catalogue would offer the market.

“It’s a really fantastic catalogue featuring a hell of a lot of good-looking yearlings presented by breeders who know what it takes to produce top-class racehorses,’’ Russell said.

“The success of graduates of this sale has been really incredible in recent years, which in turn means that it’s a sale that every buyer wants to be involved in and the knock-on effect of that is that breeders send better and better horses to the sale.

“The sale has produced 46 Australian Stakes winners since 2018 that could have been bought for $100,000 or less, which is quite staggering, particularly when considered in the context of other yearling sales.

“It’s the best value yearling sale in Australia and we are looking forward to welcoming everyone to Sydney and to our world-class complex at Riverside for what promises to be a really enjoyable sale.”

Hard copies of the Classic catalogue will be available within a fortnight.

To secure yours, email catalogue@inglis.com.au