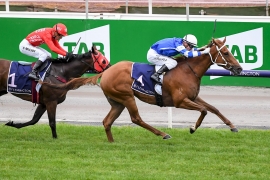 Underrated sprinter Gytrash led in a First 4 of Inglis graduates when scoring a maiden G1 victory in today’s Black Caviar Lightning at Flemington.

On a day where Inglis graduates dominated Stakes racing in Australia and New Zealand, the Melbourne Premier star Gytrash led the way, putting paid to some of the world’s best sprinters in winning the $750,000 feature sprint.

He is also the 14th individual G1 winner from the Premier Yearling Sale in the same period, eight of which have sold for $100,000 or less.

Gytrash (pictured) was bred by Packaging Investments Australia, Haltrow and Glastonbury Farms, the latter of whom first offered him for sale as a weanling at the Great Southern Sale in 2016, where Gytrash realised $70,000 to John Corcoran.

“He was always a lovely type as a weanling, a big, strong chestnut just as he is now and for a Lope De Vega to make $70,000 as a weanling back then, he really did stand out in that sale,’’ Glastonbury’s Duncan Grimley said.

“He might have surprised the punters a bit today but he didn’t surprise us. He’s always been a quality sprinter and it’s great to see him win a Group 1.

“That’s what you breed them for, to make nice money and to see them go on and win at the top level so it’s a fantastic result for everyone.’’

After selling at Great Southern, Gytrash was then offered at the 2017 Premier Yearling Sale by Maluka Thoroughbreds, where he was purchased by his trainer Gordon Richards for $40,000.

Luke Anderson of Maluka Thoroughbreds said: “We’re really proud to see Gytrash do what he did today. He was always a lovely type and this is what it’s all about for us, presenting quality yearlings to sell that we believe can go on to Group 1 success.

“We’ve got a really strong and diverse draft to bring to Premier in a couple of weeks and we can’t wait for buyers to see them at Oaklands.’’

Maluka Thoroughbreds will offer a draft of 22 at this year’s Premier Yearling Sale at Oaklands on March 1-3.

Earlier at Flemington it was fitting that on Black Caviar Lightning Day – when the great mare herself was trackside for the occasion - a 2YO out of a full sister to Black Caviar debuted with a stunning victory in the Listed Talindert Stakes at Flemington.

Ole Kirk was offered at the Premier Sale by Gilgai Farm, who also bred the colt.

“To be honest the win surprised me a bit because when you look at the family – All Too Hard, Black Caviar etc – they all get better as they get older so I wasn’t expecting this bloke to win on debut like that,’’ Gilgai’s Kelly Skillecorn said.

“He made really good money at Premier but he was a really nice colt so for him to win so early, I think that bodes really well for his future.’’

Gilgai will present a draft of 14 yearlings at this year’s Premier Yearling Sale.

Ole Kirk was one of two Inglis-sold 2YOs to win Stakes races today as Supreme Idea scored an all-the-way victory in the Listed Lonhro Plate at Randwick.

It was a simple plan at last year’s Easter Sale to “buy fast horses’’ that is now paying dividends for Dean Hawthorne and Jonathan Munz with Supreme Idea (I Am Invincible x Sweet Sister) scoring a second win from just three starts.

“She’s by I Am Invincible out of a Snitzel mare. We went to Easter last year wanting to buy horses that were fast, and this filly is fast,’’ Hawthorne said of Supreme Idea, who was bred by Nick Wakim’s Hilldene Farm.

“She’s out of a full sister to Sweet Idea who loved the mud and she won on a wet track today so it probably makes some sense to race her in Sydney if it’s going to be wet.

“She’s probably still a win away from qualifying for the Slipper but if you qualify for the Slipper, you go there I’d have thought but [trainer] Anthony [Freedman], Jonathan and [Munz’s racing managing] Rodney Douglas will work out the right itinerary for her.’’

Hawthorne bought Supreme Idea for $500,000 at last year’s Easter Sale from the draft of Glastonbury Farms.

Milburn Creek will offer a More Than Ready half brother to Supreme Idea as lot 232 at this year’s Easter Sale at Riverside on April 7 and 8.

Up against a quality line-up of seasoned mares, Sweet Deal gave nothing else a chance, leading from the outset to secure a second career Stakes win.

Craig Rounsefell’s Boomer Bloodstock bought the Pip Cooper-bred Sweet Deal for $67,500 at the 2016 Classic Sale, where she was offered by Lincoln Farm.

And a trio of Derbies awaits talented Easter colt Dragon Leap (Pierro x Pontiana) after he toyed with his rivals in the G2 Avondale Guineas at Ellerslie.

The 3YO – a $1,050,000 buy for Hermitage Thoroughbreds, Andrew Williams Bloodstock and Wexford Stables from the Coolmore draft – will next contest the G1 New Zealand Derby in a fortnight before coming to Sydney for the Australian Derby.

All going well he will then head to Hong Kong and be set for the 2021 HK Derby.

“The order was to buy the best middle-distance horse at the sale and this is the horse I believed fitted the bill perfectly,’’ Andrew Williams said of the Greg Ingham-bred Dragon Leap.

“He should be unbeaten, he’s a serious horse and hopefully we’re in for a big few months especially with him.’’

Dragon Leap is one of 29 individual Inglis Stakes-winning 3YOs this season.