Ready2Race Has That Winning Feeling 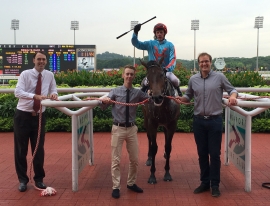 The Inglis Ready2Race Sale took centre stage in Singapore on Sunday, only a day after graduates of the sale saluted at Randwick and Flemington back in Australia.

The S$90,000 Inglis Ready2Race Stakes for two-year-olds was the feature race in Singapore and a field of 12 youngsters, nine making their debuts, faced the starter in the Inglis sponsored race.

It was the Shane Baertschiger trained I’ve Got A Feeling (Encosta de Lago x Zirna) that was the victor in the 1200m turf event over Distinctive Darci (by Darci Brahma) and Cai Poh Wang (by Helmet).

The Australian bred gelding is the eighth named foal of Zirna, a former Singapore Horse of the Year thanks to wins in the Singapore Gold Cup and Raffles Cup. Zirna has already produced Australian Group 3 winner Crafty Irna, and trainer Shane Baertschiger expects his two-year-old will only get better over further like the rest of the family.

“I thought being out of Zirna, he would be more a three-year-old over middle distances, but he’s won which is great. The Group 2 race is two weeks away, but I think we can take a chance at it,” Baertschiger said.

I’ve Got A Feeling was not offered for sale as a yearling in Australia, so was ineligible for the S$20,000 Bonus on Sunday’s race, but will still head towards the lucrative S$325,000 Singapore Group 2 Aushorse Golden Horseshoe on 8 July 2016.

Guilty Pleasures (Northern Meteor x Conclude), a graduate of MJI Thoroughbreds’ draft, took his earnings to near S$200,000 with victory in Race 3 over 1200m for trainer Shane Baertschiger and the Auric Stable.

Famous Artist (Excellent Art x Leanders Choice), which was sold by Hobartville Stud at the Sydney breeze up sale, flew past S$250,000 in career prizemoney when taking out Race 6 over 1100m for trainer Desmond Koh and owner Michael Lam.

The wins in Singapore come on the back of Odyssey Moon’s victory at Flemington and Super Tycoon’s win at Randwick on Saturday.

Odyssey Moon (Snitzel x Run To The Moon) took his earnings to $617,975 with his second win in succession. The Group 1 placed son of Snitzel was purchased by James Harron Bloodstock for $120,000 from the draft of Adam Cook, Scone, at the 2014 Inglis Ready2Race Sale.

Super Tycoon (Written Tycoon x Super Bucks) won the ATC Ron Finemore Transport Handicap over 1400m at Randwick for trainer Gregory Mcfarlane. Offered by Heritage Park at the Inglis Ready2Race Sale the now four-year-old gelding has now won four times and been placed on another five occasions for $110,610 in prizemoney.

Entries are now being accepted for the 2016 Inglis Ready2Race Sale on 4 October 2016. Entry forms can be downloaded HERE or vendors can use the online entry system at inglis.com.au

Breeze ups for the select sale will be conducted at Cranbourne in Victoria on Tuesday 6 September and Canterbury in Sydney on Friday 9 September. For more information go to inglis.com.au