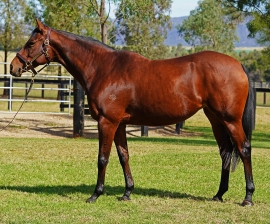 The largest catalogue in Inglis Digital’s history concluded this evening, with a record gross of $4.14 million and 420 lots sold, for a clearance rate of 77%.

The April Online Sale was topped by Kingstar Farm-consigned mare Conducir, offered in foal to Capitalist and bought by Boomer Bloodstock/Daandine Stud for $170,000.

“It was a fantastic result to purchase Conducir for Daandine Stud,” Boomer Bloodstock’s Craig Rounsefell said.

“The information provided via the Inglis Digital Online platform and the transparency of vendor Kingstar Farm ensured my client had the confidence to make the purchase.

“I was on the phone to Daandine Stud’s principal Jan Clark throughout the final hour of the sale as we exchanged bids with our competition, before coming out on top at $170,000.

“The purchase was close to home for Daandine Stud as we purchased Conducir’s half-sister Great Danasaar in 2016 in $80,000 and her first foal is the extremely exciting, unbeaten 2YO Isotope.

“We have a lot of confidence in the family and Jan was very keen to have another half-sister to Yankee Rose in her broodmare band, plus Conducir will be easy to mate as she is free of Danehill.”

Wimlah is a full sister to G2 placed Serena Bay, out of WA Listed winner Caiguna (Dubai Destination) and was offered by Gai Waterhouse & Adrian Bott on behalf of the ownership group.

“We were able to once again see the benefits of the Inglis Digital platform,” Adrian Bott said.

“We had two nice prospects reach a diverse platform of buyers, with Hey Mighty being purchased to continue his racing career in Hong Kong ($85,000) and Wimlah being recognised as a nice breeding prospect by the Cornish family of Torryburn Stud.

“The online platform plays an important part in allowing us to achieve the best possible results for our owners.”

Linda Treloar experienced her first Inglis Digital Online Sale and sold three out of four of her yearlings catalogued for the Inglis Gold Sale, including her Sooboog colt out of Mar Mara for $25,000.

“I didn’t expect this kind of result at all – I bought him for just $3,000 from the Inglis Australian Broodmare and Weanling Sale last year so it’s turned out to be a great pinhook.

“I had a really smooth experience with the whole Inglis Digital process, it’s definitely a platform I’ll continue to use going forward.

“Honestly I was blown away by the response.”

Another first time Inglis Digital vendor was Armidale Stud, who offered two yearlings, a filly by Alpine Eagle for $37,500 and a colt by Needs Further for $15,000.

“Selling on the Inglis Digital platform for the first time was a positive experience,” Armidale Stud’s Rhiannon Whishaw said.

“Entering each horse and uploading photos, videos and reports was quick and straightforward.

“The team at Inglis were very passionate about assisting both vendors and buyers and we had good interest on both yearlings in very tough times.

“I wouldn’t hesitate to sell through Inglis Digital again.”

“We were concerned that the large volume of entries might compromise the sale but the quality of lots were readily found across all categories and competition was spirited.

“Incredibly we had 400 new registered bidders since last Friday, when the catalogue went live.

“The tried horse category is always popular, but it was particularly pleasing to see the weanlings and yearlings clear well, with yearlings sold through Inglis Digital now eligible for the Inglis Race Series.

“I’d really like to thank not only the buyers but also the vendors who put their faith in the platform.

“I think selling techniques of vendors are evolving all the time but again it was very evident through this sale that buyers bid with more confidence when information is readily disclosed and quality photos/videos are provided.”

The breakdown in categories were as follows:

The Inglis Australian Broodmare Sale will be held in an online format, with bidding due to open at 10am (AEST) on Friday, May 8.

The next Inglis Digital Online Sale will close for entries at midnight on Wednesday, May 20 and will run from May 22-27.

The platform will revert to its usual twice-monthly schedule in June.