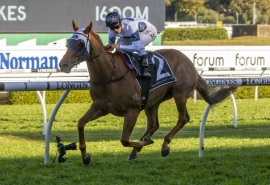 Samadoubt – the early find of the spring carnival – again led the way for Inglis graduates today, which made a clean sweep of the Randwick Stakes races for auction-sold horses.

The $40,000 Inglis Classic graduate Samadoubt (Not A Single Doubt) proved his win in the G1 Winx Stakes at $41 a fortnight ago was no fluke, producing a similarly dominant front-running display to score a comfortable victory in the G2 Chelmsford Stakes.

While he holds a nomination for the G1 Caulfield Cup, Samadoubt (pictured) will likely remain in Sydney for spring features, according to winning trainer Bjorn Baker.

“His work since his last win has been nothing less than sensational so thanks to my great team at home. He’s never been better, he’s big and strong,’’ Baker said.

“Win lose or draw now we’ve had a great preparation but we have options in Sydney.

“We’ll probably keep him at a mile. He’s an exciting prospect – you don’t often say it about a 6yo gelding.

“He’s been a phenomenal horse for me and Darby. He ran in a Breeders Plate.”

Samadoubt, who Darby Racing purchased from the Riversdale draft for $40,000 at Inglis Classic, will next contest the G1 Colgate Optic White Stakes at Randwick over a mile in a fortnight.

Earlier in the day, marvellous sprinter Redzel (Snitzel) proved he was far from a spent force with a strong all-the-way win in the G3 Concorde Stakes, the sprint deemed a Mini Everest.

Redzel, a $45,000 Inglis weanling purchase for Marquee Stud, will likely have one more run before the $14m Everest – for which he will run in the Yulong slot – where he will aim for a third consecutive win in the race.

It was his third consecutive win in the race.

And the Inglis Easter star Dreamforce (Fastnet Rock) firmed from $15 into $6 with TAB for the G1 Epsom Handicap following a comfortable three length win in the G2 Tramway Stakes.

Trainer John Thompson described Dreamforce as the best horse he’s ever trained following the win, which was Dreamforce’s 11th and took his career prizemoney to almost $1.5m.

Dreamforce is an Easter Yearling Sale graduate, where he was offered by Kitchwin Hills.

Entries for the 2020 Inglis Select Yearling Sales are closing soon.