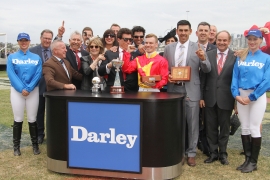 Winner of the Group I BTC Cup at Doomben back in May when trained by Lee and Anthony Freedman, Malaguerra was switched to Peter Gelagotis at Moe and prepped for his Group I assignment with a second to Star Turn in the Group II Schillaci Stakes at Caulfield on October 8.

Given a charmed ride by Ben Mellham, Malaguerra tracked the early speed set by Sheidel and Fell Swoop.

In a three horse war, Malaguerra held off the fast-finishing Spieth (Thorn Park) by a short-head with the ever reliable Fell Swoop (Not A Single Doubt) a long-neck back in third. (photos Grant Courtney)

"I want to pay a special tribute to the Freedman stable. They have obviously prepared this horse very well and given a really a walk-up start with a really nice horse," Gelagotis said.

"They have done a lot of work with the horse and I've got take over the mantle and try and uphold that system and credibility of the horse.

"I've done it to the best of my ability and I came into the race today quietly confident that I've done it right.

"I'm just very fortunate that I've been able to get a good horse in my care and achieve a result that we all dream of."

Knocked down to B Micalizzi/Bluegrass Bloodstock for $32,000 at the 2013 Inglis VOBIS Gold Yearling sale, Malaguerra advances his overall record to 11 wins and 3 seconds from 21 starts for earnings of $1,432,600.

He has become the star performer for the deceased Bletchingly mare Tennessee Morn, who on this day in 1993 won the Group II Maribyrnong Plate.

Tennessee Morn's final foal is the 4yo Wanted colt Tennessee Outlaw. After missing for three consecutive seasons, Tennessee Morn was covered by Magnus again last spring but died on March 15.

Malaguerra comes from the third crop of Sun Stud's Group I The Galaxy Stakes winner Magnus who stands the current season at a fee of $19,800.