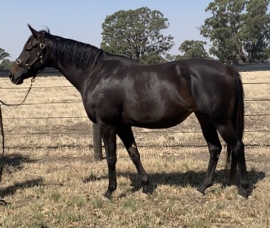 From a family that includes American sires Tiznow and Paynter, Tizso Wicked (Duporth) was offered by Rushton Park in-foal to Street Boss, the sire of 39 Stakes winners including Godolphin’s exciting 2YO Hanseatic.

“She obviously has a very deep American female family and there is a fair amount of action in the top end of the page,” General Manager Garry Cuddy said.

“If it goes in the right direction, this mare might have more value in the Northern Hemisphere which is obviously something we look for when we buy anything in Australia and vice versa when we go to the sales in the USA.

“Being in foal to Street Boss, for now we just sit back and cross our fingers that Hanseatic wins the Blue Diamond and increases the value even further.”

Tizso Wicked is the third Inglis Digital purchase for Spendthrift Australia and Cuddy believes they’ve been able to find great value by doing the right homework.

“It’s important to always be paying attention to what’s going on, it’s been a busy week for everyone with the Inglis Classic Sale but we always love looking through the Inglis Digital catalogues to see what’s out there,” Cuddy said.

“We drove to Rushton Park yesterday to inspect Tizso Wicked but the positive of these Online Sales is that we were also lucky enough to see her weanling Astern colt, indicating she can throw a lovely type – you don’t always have this luxury at a live sale.”

David Johnson from Rushton Park said the mare was offered on behalf of a long-time client.

“A great client of ours Isaac Katz actually bought her as a tried horse out of the Great Southern Sale in 2017, with the view of breeding from her eventually,'' Johnson said.

“We raced her for another preparation with David and Coral Feek, she won at Moonee Valley and we were also able to get that little bit of black type – now with Street Boss kicking we thought we’d dip our toe in the water.

“We’re really happy with the price, I thought she’d make good money because there’s a fair bit happening in that pedigree – including a half-sister selling for $335,000 in the US recently – so while in the global scheme of things she might look cheap, she exceeded my expectations.

“Her colt by Astern has just been weaned and the intention with him will be Melbourne Premier at this stage in 2021.

“Rushton Park have sold maybe a dozen horses with Inglis Digital now – we also bought Bella Vella from the April 2019 Online Sale for just $22,500 and she’s since won at Moonee Valley and more than $150,000 in prizemoney.”

The second-top lot of the February (Early) Online Sale was the Chris Waller-consigned Phoneme (Choisir), sold to Canal Enterprises for $80,000.

The February (Early) Online Sale grossed $1.032 million dollars, another pleasing result for the online platform in its twice-monthly format.

CLICK HERE to view the full catalogue and results, or to make an offer on any passed in lots.