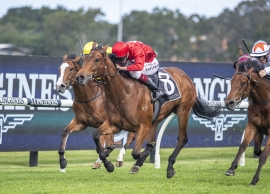 The Inglis Millennium and Golden Slipper will be at the forefront of talented 2YO Sneaky Five’s autumn campaign after she kept her unbeaten record intact with a dominant win in today’s $1m Golden Gift at Rosehill.

Following her debut win in the $500,000 Inglis Banner at The Valley a fortnight ago, Sneaky Five (Fastnet Rock x Small Minds) made the trip to Sydney for the Gift and showed she is one of the early stars of her generation with a comfortable feature-race victory.

Rosemont Stud purchased Sneaky Five for $305,000 at the Premier Yearling Sale, where she was offered by her breeder Mr Pan Sutong’s Goldin Farms.

Rosemont’s Anthony Mithen said he and trainers Ciaron Maher and David Eustace would discuss an autumn preparation tomorrow but indicated the Millennium and Slipper were the early preferences.

“It’s very much a temptation now to have a crack at the Millennium given the prizemoney on offer,’’ Mithen said.

“She ticked a few boxes there today in showing us she handles the Sydney way of going and she handles a wet track so there’s a serious chance we’ll go for the Millennium as the first target and then obviously the Slipper.

“When you consider she’s out of an Oaks winner, she’s got plenty of upside you’d think and to be honest, we probably bought her to be a mile-style of filly who might get out to an Oaks trip herself so this is all very exciting to be doing what she’s doing this early and over the shorter trips.’’

Such was the dominance of today’s win, Sneaky Five (pictured) firmed into $26 with TAB on the fourth line of betting for next year’s G1 Golden Slipper.

Today’s result continued a stellar start to the 2YO season for Inglis graduates, which filled the trifecta in Thursday’s G3 Ottawa Stakes at Flemington when Dosh defeated Nice For What and Butter Blonde.

Meanwhile at Flemington today Shelby Cobra (Toronado) announced himself a star of the future with an impressive win in the Listed The Amanda Elliott on the final day of Melbourne Cup Week.

It was a second career win at just his third race start for the 3YO, suggesting he’s in for a highly lucrative racing career.

Shelby Cobra is a $130,000 Premier Yearling Sale purchase for his trainer Mike Moroney and his bloodstock agent brother Paul Moroney from the draft of Maluka Thoroughbreds, who pinhooked the horse after purchasing him for $70,000 at the Great Southern Sale from Makybe’s draft.

In a spectacular opportunity, Shelby Cobra’s dam (Segenhoe Valley) and full foal sister are being offered as lot 136 as a package deal in the current Inglis Digital November (Early) Online Auction.

Bidding on the auction closes from 3pm Wednesday at inglisdigital.com.

The Inglis Digital platform produced yet another metropolitan winner today when Charmmebaby (Charm Spirit) won the TAB Highway at Randwick.

Vigouroux Racing paid just $14,000 for the mare in the May Online Auction – she has won four races and more than $80,000 prizemoney since.