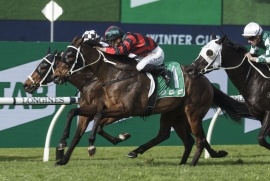 The Inglis Classic graduate Vanna Girl confirmed her status as one of the nation’s leading 3YO fillies with a dominant come-from-behind win in today’s G2 The Roses at Eagle Farm.

The daughter of Husson (ex Logan’s Choice) settled near the rear of the big field but looked the winner a long way from home, cruising past her opposition to secure a third consecutive Stakes win for trainers Toby and Trent Edmonds.

The win further assures her Star Turn half sister at next month’s Easter Round 2 will be highly sought after by the buying bench, when offered by Vinery Stud as lot 11.

Easter Round 2 is being held as a physical auction at Riverside on Sunday July 5.

“She always had that quality about her, very correct, a lovely head, a real presence but she just took some time to really strengthen up which we expected,’’ White said.

“She’s seeing the benefit now of the patience her trainers and connections have shown her. She’s the real deal.

“The half sister coming to Easter in July, she’s probably a bit more forward, got more strength at this age and being by Star Turn you’d expect her to get up and go a bit earlier given Star Turn won a race in November of his 2YO season.

“This filly will no doubt be generating a lot of interest at Riverside in a couple of weeks.’’

Trainers Toby and Trent Edmonds paid just $40,000 for Vanna Girl at the 2018 Classic Yearling Sale, where she was offered by Vinery Stud.

Meanwhile Wu Gok (Sebring) made it back-to-back Stakes victories with a fighting win in the Listed Winter Cup at Rosehill.

The Chris Waller-trained 6YO backed up his first-up win in the Lord Mayor’s Cup with a determined win in today’s Sydney feature, despite looking in trouble for most of the home straight.