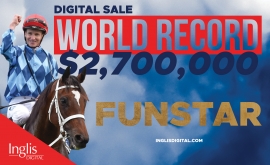 Funstar will join half sister Youngstar at Northern Farm in Japan after tonight selling to Katsumi Yoshida for a Digital Sale world record price of $2.7m in the Inglis Digital July (Early) Online Auction.

Northern Farm, who bought Youngstar for $1.4 million at last year’s Inglis Chairman’s Sale, was one of eight different bidders over the $1 million mark for the G1-winning daughter of Adelaide.

In realising $2.7m, Funstar also becomes the highest priced mare to be sold ‘under the hammer’ at public auction in 2021.

“I am so thrilled that we were able to purchase a beautiful mare,” Yoshida said.

“We have her (half) sister Youngstar and also have mares related to the granddam User Friendly.

“We are looking forward to seeing their progenies winning in Japan.”

Funstar’s managing owner Olly Koolman – who discovered the filly at the 2018 Easter Yearling Sale where he purchased her for $80,000 – was lost for superlatives at the result.

“I’m absolutely stunned. It’s hard to fathom just how much of an amazing result this is,’’ Koolman said.

“She was a fabulous race filly and mare and we had a lot of fun with her but never in our wildest dreams did we expect she would sell for $2.7m in any sale, let alone a digital sale.

“We’ve been glued to our computers since mid-afternoon, we opened a bottle of champagne at $1.3m to celebrate, so it’s incredible to be sitting here now with her having made $2.7m.

“We wish Northern Farm all the best with her, we thank all the underbidders and we can’t wait to sit back and see her progeny running in years to come.’’

G2-placed Maximak became the third-highest lot sold on Inglis Digital and the most expensive race filly, with Dave Morrissey’s Cannon Hayes Stud securing the daughter of Smart Missile for $420,000.

“I’ve tried the last couple of weeks to purchase both in Melbourne at Great Southern and also online and we’ve come up short, but maybe that was for good reason,” Morrissey said.

“We really, really liked this mare and that’s why we were so strong in the bidding.

“She’s been bought for a client of mine that has supported me from the start, we haven’t decided yet if we race her on but stallion-wise she will be visiting Dundeel if we opt to retire her.

“Maximak has a 2YO half sister by Dundeel that sold for $320,000 at Inglis Easter, so we hope that filly comes out and is a star and this mare’s offspring is an Easter graduate in years to come.

“I must thank Harry Bailey who I’ve had a lot of help from over the past few months identifying mares, and Will Stott inspected her at the weekend on my behalf.

“It’s nice for a farm starting off to get quality mares like this, especially at the moment, the market is unbelievable.”

The hot mare market was one of the deciding factors for Matt Laurie Racing to offer Maximak on Inglis Digital.

“We would’ve liked to have gone on with her and we were weighing up whether to spell her and race her on,” Laurie said.

“We made the decision to sell online because the whole process is just so easy, it attracts the big-time buyers, they all do their due diligence and horses like this sell themselves.

“The recent results demonstrate how well the platform is working and Maximak certainly made more than we thought she would.”

Multiple Stakes-winning mare Delectation Girl (Delegator) was purchased by Suman Hedge Bloodstock on behalf of a client for $245,000.

“I went and saw her privately during the week and it’s likely she will visit Written Tycoon,” Hedge said.

“I thought she’s a very well performed mare, her form really has depth to it, and we really backed her on that ability.

“We probably weren’t able to get everything we wanted going into the breeding season, so Inglis Digital has given us the opportunity to make sure we have the arsenal.

“I still went and did my due diligence and inspected her, but when I’m not able to get to a farm myself we have trusted contacts to do the legwork for us, it’s about being adaptable.

“The Inglis Digital sales are not only giving people the chance to trade horses with less encumbrances but providing a really active marketplace.”

Macedon Lodge’s Grant Sheldon said he was delighted Delectation Girl had been purchased by an astute buyer and would get every chance to succeed in the breeding barn.

“To be honest we didn’t initially want to sell her but when we saw what mares were making in June, we decided to test the market with her,” Sheldon said.

“She has international bloodlines that aren’t readily available in Australia, and she’s won twice as a 2YO over 1200m which is another big tick.

“We’ve had good success on Inglis Digital over the years, we have a nice band of quality mares – most of them Stakes performed – and due to a range of circumstances we’ve had to cut back at times, and we’ve found it’s a great platform for that, especially with the mares.”

“It’s not only a significant milestone for Inglis Digital but for the bloodstock industry worldwide.

“To have Inglis Digital break a world record, to have Northern Farm pay $2.7 million for Funstar without even seeing her, just demonstrates the unbelievable confidence in our platform.

“But there is immense satisfaction from the whole Inglis team about many of the results, aside from the high-profile top lots.

“For example, Missed The Alarm (Rip Van Winkle) made more than 10 times her reserve and stallion Native Soldier (Sepoy) sold to Wermer Stud in Denmark.

“That just shows the reach of Inglis Digital. From modest results to world records in just four years of operation.”

To make an offer on a passed in lot, CLICK HERE.

Entries for the July (Late) Online Sale are now open and will close at midnight next Wednesday, July 21.