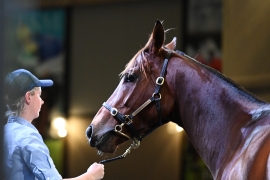 G1 Oakleigh Plate winner Celebrity Queen tonight became the highest-priced mare ever sold at an Inglis Chairman’s Sale when realising $2.5m to Coolmore on a spectacular night of action at Riverside.

Amid dramatic theatre in the Riverside auditorium, Coolmore won the bidding battle at $2.5m for the regally bred mare, which was offered by Holbrook Thoroughbreds on behalf of owners and breeders Bob and Sandra Peters.

On a stunning evening at Riverside:

*Coolmore flexed its muscle to end the night as leading buyer, purchasing three of the top five lots – Celebrity Queen, El Dorado Dreaming and Savanna Amour – for a combined $5.1m. Each of the three mares will be served by Coolmore’s latest superstar shuttle stallion Wootton Bassett

*The sale’s average of $532,736 is the highest of any mare sale in the southern hemisphere

*Courchevel, the Snitzel half sister to world champion Winx, sold to Arrowfield for $900,000 from the Segenhoe draft

The top lot was Celebrity Queen (Redoute’s Choice), the Bob and Sandra Peters-bred mare who won seven of her 14 career starts including a dead-heat Oakleigh Plate victory earlier this year.

Bob Peters, who was unable to be at Riverside for the auction, was thrilled with the result.

“We’re delighted. I thought she’d bring $2m so it was great to get $2.5m, it really was,’’ Peters said of Celebrity Queen, pictured.

“You could just about say that if you were writing the history of breeding in Australia, you could use her as a prime example - you look at her page and there’s her sire Redoute’s Choice, which also gives you Danehill, there’s Sir Tristram, Marscay, More Than Ready etc, all of them champions, just as she was.

There’s a Group 1 winner on every level of the pedigree. It’s just outstanding.

“This is a great result. Inglis has done a great job with the promotion of her which I’m grateful for and while I’m not at the sale, I’m aware it’s a great night there tonight.’’

“We thought she was a queen, we’re very lucky to have her,’’ Magnier said.

“Bob Peters is an unbelievable breeder and anything Bob Peters is associated with is always of a very high calibre so we’re just delighted to get her.

“When those kinds of blue hens come into the ring, you know you’re going to have to pay to get them.

“We’ve had the plan for a long time to acquire mares like this for our stallions, we’ll keep going and support these stallions and try and get the best mares possible along the way.’’

The second-top lot was dual G1 winner In Her Time – offered by Newgate Consignment in foal to I Am Invincible – who was purchased by Yulong for $2.2m.

The bidding opened with a stunning $1.5m bid and continued on an upward spiral until the gavel fell at $2.2m.

In Her Time will be served by Yulong’s latest acquisition, Written Tycoon, at her next service.

“Mr Zhang’s always loved her. He tried to buy her last year but missed out, but this year he had his mind set on buying her, being in foal to I Am Invincible especially,’’ Yulong’s Sam Fairgray said.

“She’s a high-class sprint mare, the industry is strong at the moment, mares of this quality are certainly worth their value so we were always going to have to pay.

“We love this night and this sale, the atmosphere is great, the quality of mares and race fillies off the track is very high in this catalogue. Breeders have got a lot of confidence after the yearling sales and are filling up their broodmare bands again.’’

Newgate’s Henry Field added: “She’s a beautiful mare, she was a champion sprinter, it was a great result all round. Orbis have sold at a great price, Yulong have bought a ripper, all round it was fair trade.’’

The third-top lot was two-time G1 winner Pippie, who realised $1.8m to Tasman Bloodstock, on behalf of Cressfield.

Pippie, who will likely be served by Darley’s Exceed And Excel, was offered by Sledmere, on behalf of the mare’s connections.

“We know the market is strong, quality horses make big money and she’s a quality horse. We knew we were going to have to be strong to get her,’’ Cressfield’s Wayne Bedggood said of the $1.8m price tag.

“She was one of our top mares of the sale and we missed out on a couple of others so it was nice to take her home.’’

“We’re absolutely delighted to be supporting it every year, it gets a great atmosphere, Inglis do an amazing job to get all the big buyers here for these incredible mares.

“These are some of the best offerings in Australia, if not the southern hemisphere and around the world. You don’t get a catalogue like this just anywhere.’’

“Our industry is in wonderful shape and with the yearling sales, the weanling sale and now the start of the broodmare sales being so strong and resilient to global financial indifferences, there is no denying we are involved in one of the strongest industries and sports in the world at present in Australia.

“The Chairman’s Sale is a wonderful event, credit to my team for putting on such a magnificent night and to those who supported it along the way, be it as presenters or buyers tonight.’’

The Inglis Breeding Stock Sales Series concludes on Sunday at Riverside with the Australian Broodmare Sale.

Broodmare parades continue tomorrow ahead of the sale, which begins 10am Sunday.