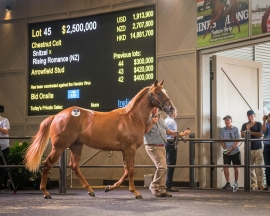 An extraordinary opening day of Inglis Easter has resulted in a record individual day of trade for a Southern Hemisphere yearling sale, with $64,470,000 grossed at Riverside.

On an incredible day of action:

*The Day 1 gross eclipsed the previous record of 2019 – held by Inglis – further enhancing Inglis Easter as the No.1 auction to sell a yearling

On the top lot (pictured), Arrowfield’s John Messara described the colt as “perfect in every way’’.

“He’s just a magnificent individual, a hell of a horse,’’ the Arrowfield principal said.

“He’s an ideal colt to be an early goer. He looks precocious, even though he’s out of a mare who got up to a mile-and-a-quarter so he’s going to be twin purpose.’’

Wayne Hawkes was in full agreeance.

“We’ve had such great success out of the Inglis sales – I’m just looking up on the wall and see the big photo of Estijaab, she was a top-priced Snitzel filly at Easter - so hopefully this bloke can go on and be another great one for us and the connections,’’ Hawkes said.

“When John Hawkes tells you, after the first time he looks at it, and says ‘this horse has got to go home with us’, he’s the bloke who’s bought a stack of Group 1 winners out of this sale, not me, so when he says that, you’ve got to listen and you’ve got to make it happen. It’s a good sales pitch when he thinks he’s the one.’’

Lot 5 was a highlight for Vinery Stud who had a history-making day, ending Day 1 with a sale-leading average of $816,250 from eight lots sold, which included three $1m+ yearlings and another that realised $950,000.

“I don’t think there would be too many farms that have had days like this really. It’s a day like no other for us, that’s for sure,’’ Vinery’s Adam White said.

“We knew we had a great bunch of horses here but it’s not until you put them through that ring that you really know and to see the results of today, it’s an extraordinary day for the whole team at Vinery.’’

On the Exceed And Excel colt, White added: “He was out more than any other horse of ours on the complex this week so we knew the right groups were on him and he sold accordingly.

“I didn’t think he’d sell for that much though. We were confident he would get over the $1m mark quite comfortably but didn’t know where he’d pull up after that.

“He’s got a fantastic pedigree, a great attitude and he’s just an athlete.’’

The colt will be trained by Annabel Neasham.

Shane McGrath, representing Fung, described the colt as “the best horse we’d seen in a couple of years at any sale’’.

“He was a must-have colt for all of us, it’s as simple as that,’’ McGrath said.

“He’s got a great temperament, a fabulous action, a huge hip on him, I was watching him walk around a couple of times and all I could think of was you can absolutely picture him walking around before a Slipper next year with a saddle on his back.

“There’s some fabulous colts here, as you’d expect at Easter. Everything is going so well here in Australia with great racing and breeding and the breeders who are producing these types of horses are going to get really well rewarded, as they should.’’

Inglis’ Managing Director Mark Webster was blown away by the strength of the market.

“We always believed we had a strong catalogue and everybody knows Easter is the Best of the Best but at the end of the day, we are still in the midst of a global pandemic but my team has worked extremely hard to ensure as many buyers as possible were on the grounds or in front of their computers and the result are there for all to see,’’ Webster said.

“The quality of horses that the breeders and vendors have presented this week at Riverside is nothing short of exceptional and they deserve all the financial reward they get.

“Yet again, Inglis Easter is proving itself as the No.1 place to sell a top-level colt or filly.

“All that said, the job is only half done and there is another day ahead of us tomorrow where we offer the last Redoute’s Choice, the last Deep Impact and the last of the Shadwell reduction so it’s going to be another poignant day in the history of our great industry.’’

To enquire about a Passed In lot from today’s action, contact Harry Bailey from the Inglis Bloodstock team on 0420 997 417.

The second and final day of the 2021 Easter Yearling Sale will begin at 10am at Riverside and will again be broadcast live on the Inglis website and Facebook page via our Sale Day Live coverage from 9.30am.

Today’s broadcast saw a 60% surge in viewership from already impressive stats at earlier sales this year, with 50,000 individual viewers for the day and more than 150,000 views, from 104 countries, matching last year’s spectacular Easter coverage.

Online Bidding and Make An Offer facilities will again be available.