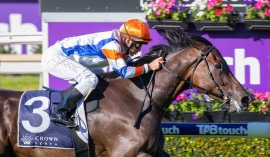 The Tony and Calvin McEvoy trained 6YO Hey Doc (Duporth) claimed his third career G1 win with a dominant performance in the $1m Winterbottom Stakes over 1200m at Ascot on Saturday.

An $85,000 purchase by McEvoy/Mitchell Racing from the Rosemont Stud draft at the 2015 Inglis Premier Yearling Sale, Hey Doc was taking his earnings past the $2.3m mark, having previously won the G1 Australian Guineas and the G1 Manikato Stakes.

The win of Hey Doc continues the extraordinary run of success being enjoyed by Inglis graduates and he becomes the 40th individual G1-winning graduate of Inglis auctions since 2018.

An emotional Adrian Hall, breeder and part-owner of Hey Doc, was understandably in awe of his charge post-race.

“He had a very serious injury and there was a time when we wondered if he would ever race again, so to see him here, today, winning a G1 is quite incredible,” said Hall.

“Credit to Tony and Calvin McEvoy and their team for getting him back to where he is today – he is just an unbelievably tough horse and Luke (Currie) said as soon as he jumped to the front today, he was never going to get beaten.”

Hey Doc’s win also marked a significant milestone for the Tony and Calvin McEvoy training partnership, it being their first G1 since going into partnership in September.

“This will be the first of many (G1 wins) together, I can assure you,” said a proud Tony McEvoy post-race.

Harry McAlpine of Eureka Stud, who consigned Sugar Boom to the 2018 Inglis Easter Yearling Sale and stand her sire Spirit Of Boom was delighted with the result.

“She is a very progressive filly, this being her 4th win from 7 starts and she is the 10th individual stakes winner for Spirit Of Boom from his first two crops.”

At Morphettville, tough 6YO Benz (Bushranger) took his earnings past the $445,000 mark with a win in the Listed City Marion Stakes over 1200m.

Benz was an $11,000 purchase at the 2014 Inglis Great Southern Weanling Sale, sold through the draft of Eliza Park.