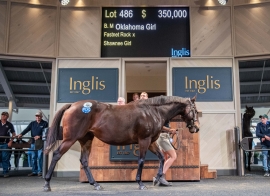 A colossal week of trade at Riverside has come to a stunning end with today’s Australian Broodmare Sale enjoying extraordinary growth across all key financial indicators.

In what has been a fantastic series of sales at Riverside:

*Friday night’s spectacular Chairman’s Sale averaged $532,736, making it far and away the best high-end mare sale in the southern hemisphere

*The inaugural HTBA May Sale – a rebrand and expansion of the old Scone Sale - was also a resounding success, with the two-day auction grossing in excess of $5.2m, with a clearance rate of 85%

*Of the 96 vendors that offered drafts at Riverside across the week, 40 enjoyed a 100% clearance rate.

The G1-placed three-time winner (pictured) was purchased by Rosemont Stud for $350,000 and will be served by their latest acquisition Hanseatic.

It capped off a big week for the Rosemont team, who also purchased a second lot today as well as three mares at Friday night’s Chairman’s Sale.

“She’s a ripper. It’s a great family and they’re the sorts of broodmares - by a great broodmare sire and great sire in general in Fastnet Rock - we should be adding to our collection and giving our new boy Hanseatic a good chance with,’’ Rosemont’s Anthony Mithen said.

“It is Mother’s Day and [Rosemont owner] Nigel [Austin], he’s married to an Oklahoma girl, would you believe. Melanie Austin, his wife, is from Oklahoma, so we had one more bid because of a very clever name.’’

On the overall week of action, Mithen added: “It’s been unreal. It’s a fantastic facility and I was only thinking this morning coming down from the room and how easy it all is here.

“It’s horse heaven here at Riverside in terms of its sophistication and state-of-the-art build and we’re privileged to have functions and sales like Friday nights to attend and give everyone a party.’’

Coolmore’s Paddy Oman said of Oklahoma Girl, who was offered on behalf of the Ingham Family, who bred the mare: “She’s a beautiful mare, raised on the farm by the Ingham family and it is a family that just keeps producing good horses.

“We’re very grateful to Nigel, Anthony and the team at Rosemont for their support. They are great friends of ours and hopefully she’s lucky for them.”

Today’s second-top mare was lot 328 Agueda (General Nediym), offered in foal to Capitalist, which was purchased by Brae Sokolski’s Yes Bloodstock for $320,000.

The Stakes-placed Agueda was offered by Newgate Consignment – the mare was owned by Newgate staff Jim Carey, Jackson Beirs, Rachel Safir and Leanna Packard - who ended the week as overall leading vendor, grossing $7,329,000 from 25 lots sold.

“It was a great result for them, she’s a very pretty mare, a beautiful mare with the right covering in her,’’ Newgate’s Henry Field said of Agueda.

“I think she’ll be a really good mare for Yes Bloodstock, they’re very smart operators those guys, they’ve bought the best mare in the sale.’’

On the week overall, Field added: “It’s been a great week. We worked really hard to build a blue chip consignment in the Chairman’s Sale and were leading vendor by twice the amount of the next best vendor.

“We’ve worked really hard to build our brand and our business around a consignment of the highest level of bloodstock with absolute transparency in everything we do, as buyers and sellers and we’ve been rewarded by the market that has supported us well.

“Inglis should be commended on a terrific execution of the week. From the weanlings through to the Chairman’s and now the broodmares, it’s all been brilliant.’’

Sokolsi teamed up with Astute Bloodstock at this year’s Classic Sale to purchase Agueda’s Star Turn filly for $310,000 and was thrilled to now be taking the mare herself home.

“When we bought the filly at Classic, I absolutely loved her as a physical so I know this mare can produce quality types so it’s nice to be able to call her mine now,’’ Sokolski said.

“She’s a natural fit for us because I’m looking to improve and enhance my broodmare band with more quality and proven mares, so the fact she was in foal to Capitalist was just a bonus.

“I’ve got a lot of younger mares, but we want some more proven mares who we know can throw a nice type and she fits that bill.’’

Inglis’ Managing Director Mark Webster couldn’t have been happier with the success of the past week.

“What is there left to say? It’s been a fabulous week on all fronts, from the yearlings to the weanlings to the Chairman’s Sale to today’s broodmares, vendors are happy, buyers are happy and I’m very happy,’’ Webster said.

“There has been a great atmosphere at Riverside the past fortnight, all the way through inspections and the week of sales and that has really transferred into world-class action and theatre in the auditorium for each of the sales.

“For the Chairman’s Sale in particular, to average in excess of $500,000 and clear 91% has seen it in a very short period of time become the No.1 top-level broodmare sale in the southern hemisphere and we already have plans to make it even better in 2022 and beyond.

“As always, our breeders and vendors have presented such outstanding quality all week and the buyers have been the big winners from that and I have no doubt they will continue to be the winners in years to come, be it on the race track or in the breeding barn and sales rings of the future.’’

Buyers’ attention now moves to the digital space with the Inglis Digital May (Early) Online Sale.

The catalogue of 311 – which includes a half sister to multiple G1-winning Inglis graduate Montefilia – is now open for bidding, with the final countdown of bidding beginning from 3pm Wednesday.

To view the catalogue, to register to bid or to participate in the auction, CLICK HERE.

Focus then moves south to Melbourne for the two-day Gold Yearling Sale at Oaklands on Sunday and Monday (May 16 and 17), where a catalogue of 339 yearlings has been formed.

The sale is responsible for recent G1 winners Lunar Fox and Media Award, and of those catalogued for this year's renewal, 184 are Super Vobis nominated, opening up so many added financial windfalls for owners.

The Gold Sale begins at 10am next Sunday.