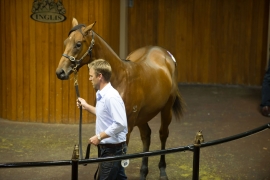 What a difference a year makes.

The Chris Waller-trainee was back for a second attempt on Saturday but he found one better in the admirably consistent Scales Of Justice.

The Lindsey Smith-trained 4yo gelding is also a son of Not A Single Doubt who was celebrating his fifth winner at the elite level off the back of a break-out season in which only Street Cry (IRE) topped his earnings.

That was his first stakes attempt.

With Hong Kong legend Douglas Whyte taking the ride from the suspended Paul Harvey on Saturday, Scales Of Justice went straight to the lead and never looked backed.

Defending champion Good Project was given a peach of a ride by Hugh Bowman but could get no closer than two and three-quarter lengths from the winner with Perfect Reflection (More Than Ready) a head back in third.

"It's good to get another Group One in Western Australia," Whyte told Sky Thoroughbred Central.

"Lindsey gave me confidence and said it nothing else wants to lead, you lead.

"When I turned for home and pressed the button he had a whole lot of engine there."

Smith said he would make a decision later on whether Scales Of Justice would tackle the Kingston Town in two weeks.

"We got Douglas down here, it cost a lot of money because I think he's got his own plane, he does his homework and he showed why he's been champion jockey in Hong Kong so many times." Smith said.

With his second stakes victory in the space of seven days, Scales Of Justice advances his overall record to 7 wins, 5 seconds and 1 third from 13 starts with earnings of $945,250.

Bred by Gerard and Kathy Hammond, Scales Of Justice (pictured as a yearling) was consigned to the 2014 Inglis Premier Yearling sale by Milford Thoroughbreds where he was knocked down to Boomer Bloodstock/Lindsey Smith for $180,000.

A half-brother to three winners including the stakes-placed Cruyfforme (Johan Cruyff), Scales Of Justice is the sixth live foal of the unraced Umatilla mare Beymatilla, a half-sister to the stakes-placed Rancho Rose and to the dam of Group III VRC Standish Handicap winner King Hoaks (King Charlemagne).

Beymatilla was consigned to the 2014 Great Southern Bloodstock Sale where she could not make her paltry $400 reserve.

She has not had a live foal since Scales Of Justice but was covered by Magnus last spring.